The Art of Chocolate Tasting

Tasting chocolate is a very personal thing, tastes vary from one person to another, chocolate and cocoa are as diverse as the continents that they originate from. Chocolate is just like wine, whisky or coffee, there are many factors which contribute to the final flavour of the chocolate.

The most important point is where the cocoa is grown and the variety of the beans. Cocoa is a very fragile tree and grows only in tropical regions within latitudes of 20 degrees either side of the equator, where it is dependent on a year-round temperature of 70-77°F. Cocoa is usually surrounded by other trees which provide shade & protection from harsh sun. This protection is very important when the tree is young as they only need 50% of the available light. Cocoa grows better above sea level and requires at least 65-70% humidity all year round; a cocoa tree reaches full maturity after approximately ten years.

Cocoa Growing in the Modern World

Chocolate producing countries form a belt around the equator, there are eight main cocoa growing regions:

IVORY COAST & GHANA
–
Forastero beans reached Africa in 1822, and by 1921 Africa had replaced the Americas as the major cocoa-producing continent. Akwabba, meaning welcome, is the greeting with which Ghanaians will welcome you to their country, formerly known as the gold coast, this friendly heart of black Africa is bordered by Côte d'Ivoire. In Western Ghana lies the Ashanti region which is the centre of cocoa cultivation where dark, magnificent and intense cocoa has become the new gold. Today Ghana and the Ivory Coast provide 70% of world production – all Forasteros, this is known as bulk cocoa used in the production of both popular chocolate and coverture.

INDONESIA
–
Cocoa from Mexico was introduced to Indonesia in 1515 by the Spanish, but commercial and intense exploitation only started in the 1970s. Most Indonesian cocoa is acidic and poor quality; only Java has very fine cocoa, which almost always comes from the Criollo bean. Most Indonesian cocoa is grown on the island of Java, it was probably smuggled into Indonesia through the Philippines in the 17th century. It was first planted on the island of Sulawesi and later exported to Java. Originally, an extraordinary Criollo variety was grown in Java – the Java Red – with superior, refined aromas. Later, more robust Forastero hybrids were introduced and planted. Javanese cocoa has a typical pale, reddish colour and remarkable aromas. Nowadays the Java bean is extremely rarely available.

MEXICO
–
The birthplace of manufactured cocoa, Mexico now mainly produces lower quality cocoa, although there are a few plantations producing single origin and estate cocoas, particularly from Criollo beans. When Cortes and his men first set foot in Mexico in the 16th century, one of the strange things they encountered was xocoatl. They were curious to see the Aztecs using the strange almond-like seed as currency. No-one could have imagined that this would lead to the spread of chocolate and cocoa around the world. The new world still harbours the legends of the Mayas, Toltec’s and Aztecs. Mexico’s cocoa trail leads us to the eastern state of Tabasco on the Caribbean coast and its southern neighbouring state of Chiapas on the Pacific.

COLOMBIA
–
This is a country of great geographical diversity and produces 76% of the Worlds Cacao Fino de Aroma, some of the finest cacao available in the world today. There are 4 main growing regions Santander, Huila, Tumaco, Arauca. Santander cocoa is grown in the Andes mountains; Tumaco , in the tropical forests of the Pacific Coast; Huila cocoa is typical of the regions deep valleys. In Arauca, cocoa grows in wild landscapes between the snow capped mountains and valleys of the Orinoco Mountains, forests and valleys.

VENEZUELA
–
Venezuela became a major cocoa producer at the beginning of the 17th century, but due to extreme weather conditions in the 1930s, it now only has a very small part of the world market. However, this country produces some of the finest cocoa in the world in terms of quality, specializing in small productions from specific plantations resulting in some very fine single estate and rare vintage cocoas.

EQUADOR
–
This country produces 3% of the world crop and produces some quality cocoa which is genetically superior to West African cocoa but is as yet not rated very highly.

MADAGASCAR
–
Madagascar produces very small amounts of cocoa in the grand scheme of things with less than 0.5% of the world’s total production, however most are very fine quality cocoas mainly from the criollo bean.

The Varieties of Cacao

There are 3 main varieties of cacao but many hybrids and variants:

The Forastero
–
This is the most common, the most robust and highest yielding. Often referred to as bulk cocoa, this variety is grown mostly in Ghana and the Ivory Coast.

The Criollo
–
This variety is everything that the Forastero is not. A fragile tree with a small yield, it is widely considered to give the finest flavoured beans. Criollo is mainly grown in the Latin American countries.

The Trinitario
–
This bean is descended from a cross between Criollo and Forastero beans; it has hybrid characteristics of robustness, aromatic beans, and an average yield.

Tasting fine chocolates and cocoas should involve the five senses:

First, we LOOK at our chocolate, it should be smooth and glossy, indicating that the cocoa butter has been properly crystallized or tempered.

Next, we TOUCH our chocolate, it should not melt immediately in your fingers, no sign of graininess or a sandy texture.

Next, we LISTEN for a snap as we break our chocolate, this is another indication of well-tempered cocoa butter, milk chocolate will never snap in quite the same way due to its milk solids content.

Finally, we TASTE our chocolate, allowing it to melt slowly on the tongue, coating our mouth, this way we appreciate all the subtle aromas and flavours in our fine chocolates.

I am very proud to use Callebaut’s Finest Belgian Chocolate which is produced from sustainably grown cocoa under the Growing Great Chocolate and Cocoa Horizons Foundation program which is better for cocoa farmers and provides them with a fairer living, better agricultural training, access to funding and many other benefits. 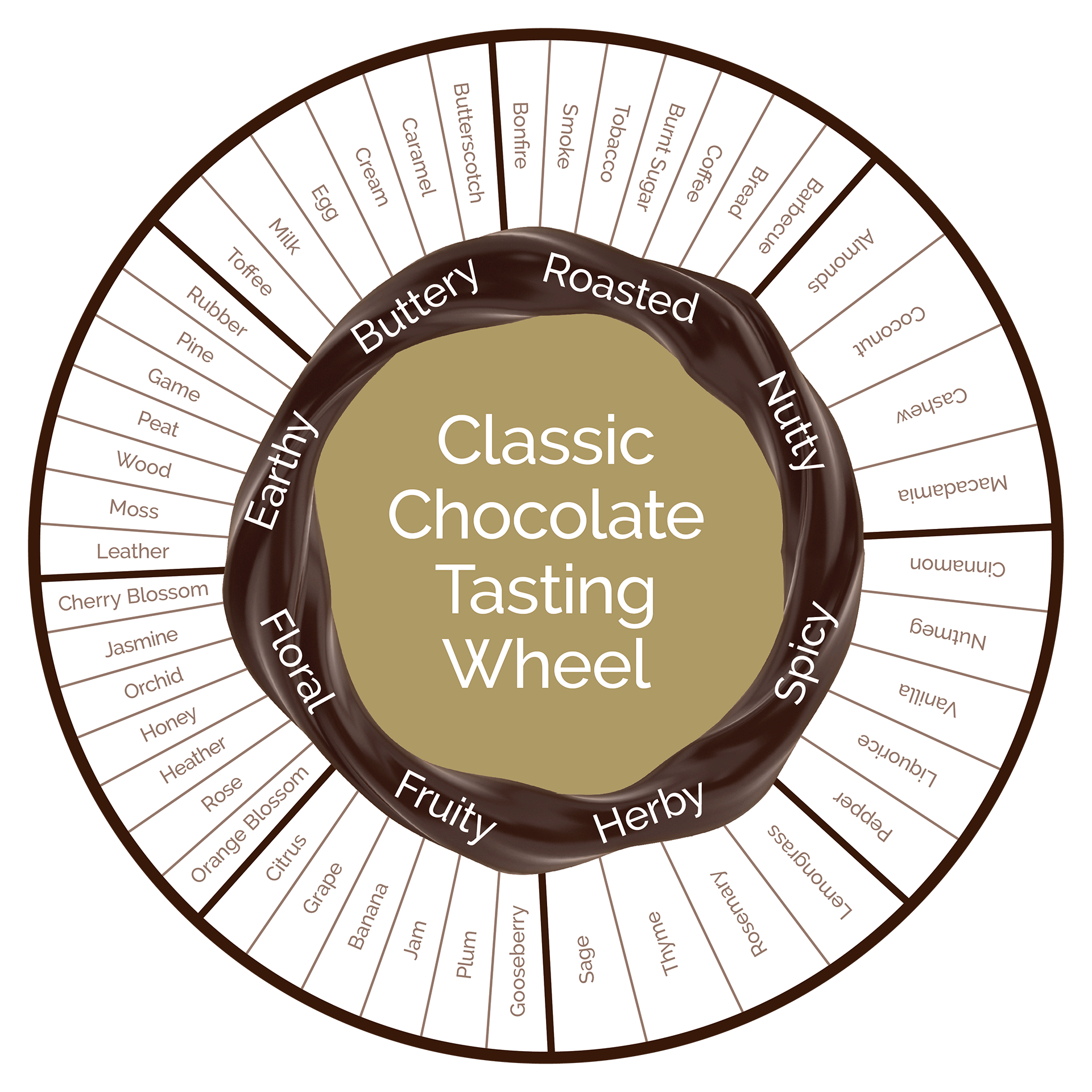 Sign up below to receive the latest news, information and offers from Andrew Thwaite.